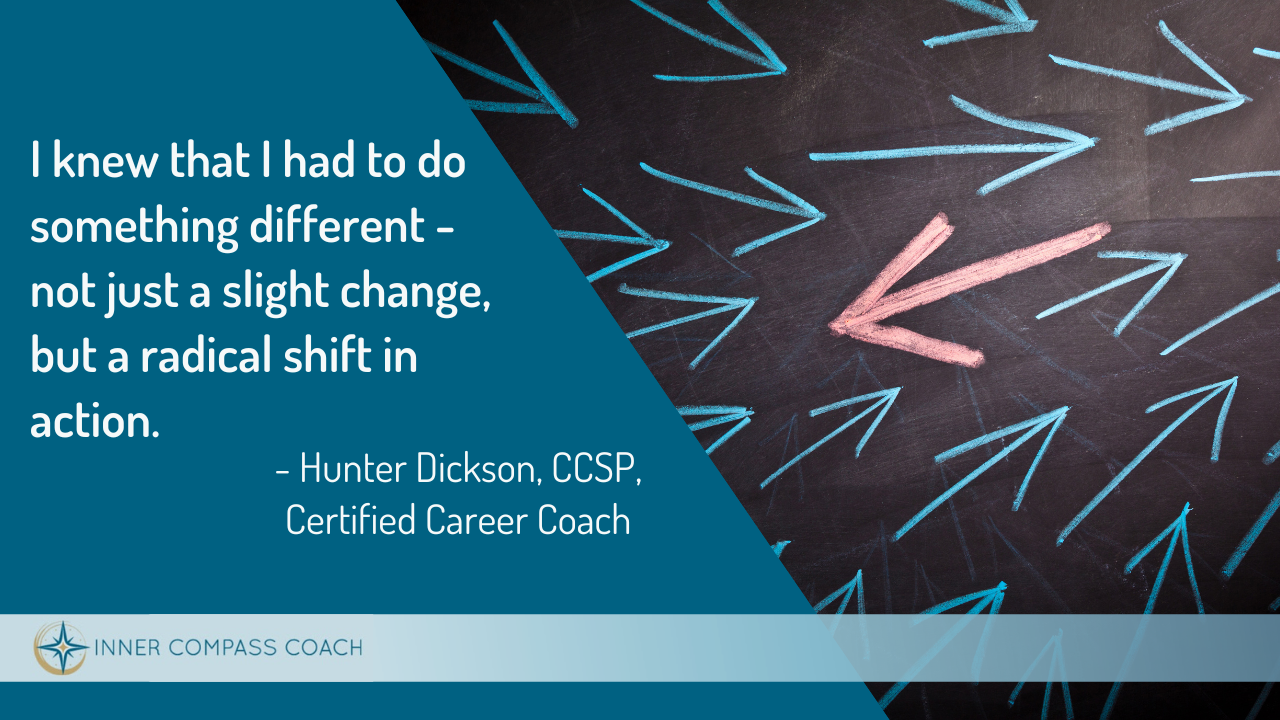 The Wisdom of Opposites

By Hunter Dickson, CCSP, with the help of Danielle Roessle, LCSW, GCDFI, CCSP

Kate Stillman, the author of Body Thrive, explains the concept called The Wisdom of Opposites, which means that we sometimes must do what is counter-intuitive to us and do the opposite of our inclination.

In early 2018 when I was trying to figure out my next career move, my instinct at first was to avoid the job search every time it got scary when, in reality, I needed to accept the fear, take action and ask for help.

At the time though, all the fear, self-doubt, and “what if’s” swirling around in my head were so strong, they stood in my way like a huge guard dog preventing me from moving forward. My fear that I would never find a new career or be unhappy no matter what I did circled in my brain for months and paralyzed my job hunt. And even when I tried looking for something new through Google searching or online assessments, that guard dog in my brain made up of fears just kept growing and becoming stronger, causing me to try and push it away or ignore it.

I knew that I had to do something different; not just a slight change, but a radical shift in action. In my case, that meant doing the opposite of my instincts not only once, but twice.

Because even though I thought I wasn’t doing anything in those early months, in reality, I was so active in trying to avoid feeling afraid and facing my fears that I had basically become a professional at it. So if running away from my fear of change was causing me to freeze, then I needed to do the opposite and embrace it. And once I did, I discovered that the scary guard dog turned out to be more like a scared overgrown puppy that needed someone to help calm it down.

My fears of change weren’t as terrifying, because I now had a new thought that was much stronger and way scarier: what if I am stuck here forever?

Now that might sound a little dramatic, but fears often do, and it’s part of what makes them so terrifying. And suddenly, the idea that I might do nothing and be stuck in this miserable job for the rest of my life was propelling me out of being stuck and into action. Because even though the initial fears of failure and self-doubt were still there, rather than running away from them, it now felt like they were riding shotgun as I tried to get away from the much scarier idea of nothing ever changing.

While taking action was scary, I thought about a quote from world-renowned author Stephen King (ironically known for his spooky writing), “It was the possibility of darkness that made the day seem so bright.” I love this quote because it allowed me to hold the duality of my opposing fears -  embracing one type of fear, fear of change, suddenly made it easier for me to recognize another, greater type of fear: the fear of nothing changing.

Fast forward, I signed up to work with Danielle in late 2018 and was exploring career counseling as a career possibility for me. During my Inner Compass journey, I realized my best chance at getting answers to all of those “what if” questions would only come if I physically went out and found them through career conversations/ informational interviews (career conversations are interviews with people who are in careers in which we are interested in).

I truly didn’t understand how much my fear and hesitations about making a career change were based on false assumptions and misperceptions until I actually sat down and talked with people currently in these possible job roles. For example, even though I was literally working with a career coach, my core assumption I had made was that becoming a career counselor meant working in a high school or higher education, which was the exact environment I was trying to move away from.

But I was still being propelled forward by my fear, so I did the opposite once again, and I reached out to my old university to speak with a career counselor who I had worked with as a student. That single conversation began an entirely new domino effect as she told me about both the good and the bad of her job because even though some of my ideas about being a career counselor were correct, I also had this entire other experience I was comparing it to. Throughout that conversation with her, I kept coming back to my experience working with Danielle, and how being her client and watching her work was so vastly different from the job this other woman described.

And even though it was scary to reach out to that person, that conversation opened my eyes and propelled me to take even more action in order to learn everything I didn’t know or was ignoring about becoming a counselor and coach.

We can apply The Wisdom of Opposites to our own life by asking ourselves what it is that we are thinking, feeling, or doing that is preventing us from moving forward, and then look to its opposite for our next step.

If I had not acted and let my fear spiral away, I would never have asked for help and realized how wrong I was about what being a career coach was like or my own talents as one; and I definitely would never have known how much I could enjoy my work if I hadn’t been willing to step out and stop my collection of doubt from piling up.

Instead, I now get the amazing opportunity to help my clients embrace and use their fears and doubts to help discover what information they are missing or making assumptions about. Once we know what to look for, we have a better chance of finding the people and resources my clients need to push them forward in their own career discovery. While taking counter-intuitive action can be scary, it doesn’t have to be taken alone - I walk side by side with my clients as they face their concerns and move confidently down a new path without letting fear hold them back. 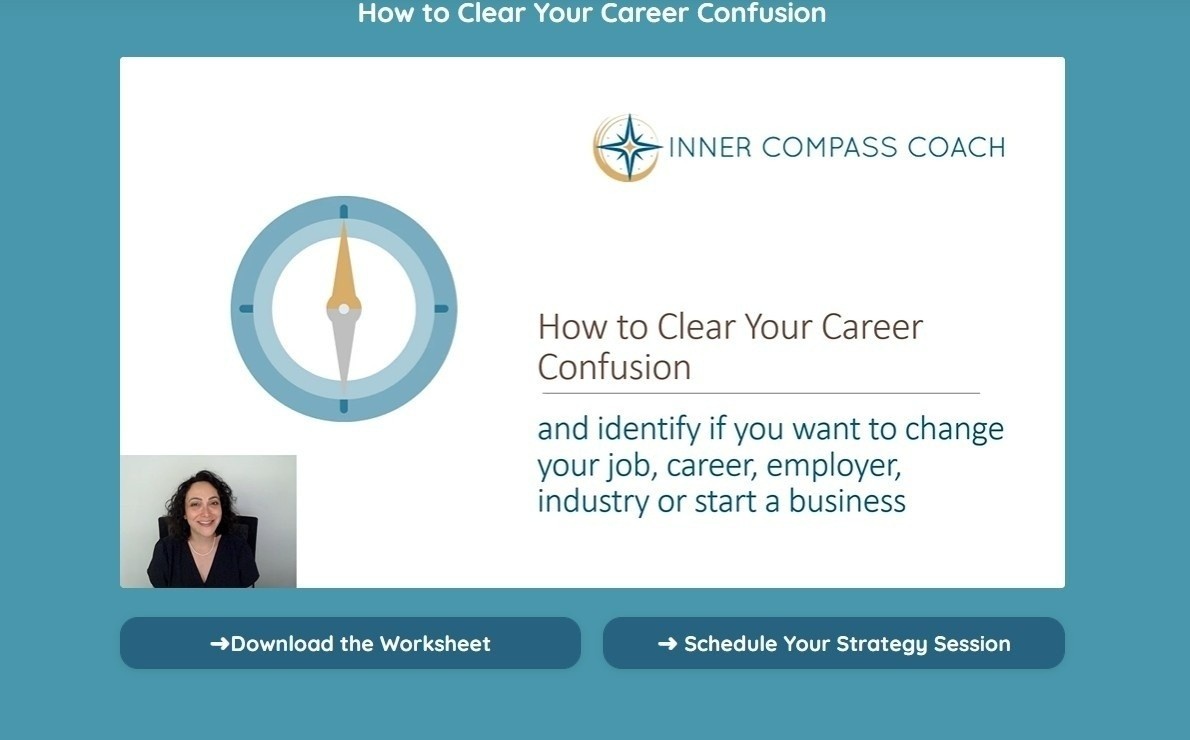 REGISTER for Clear Your Career Confusion mini course and:

Plus, I have some BONUS trainings I'll be sending your way for signing up! 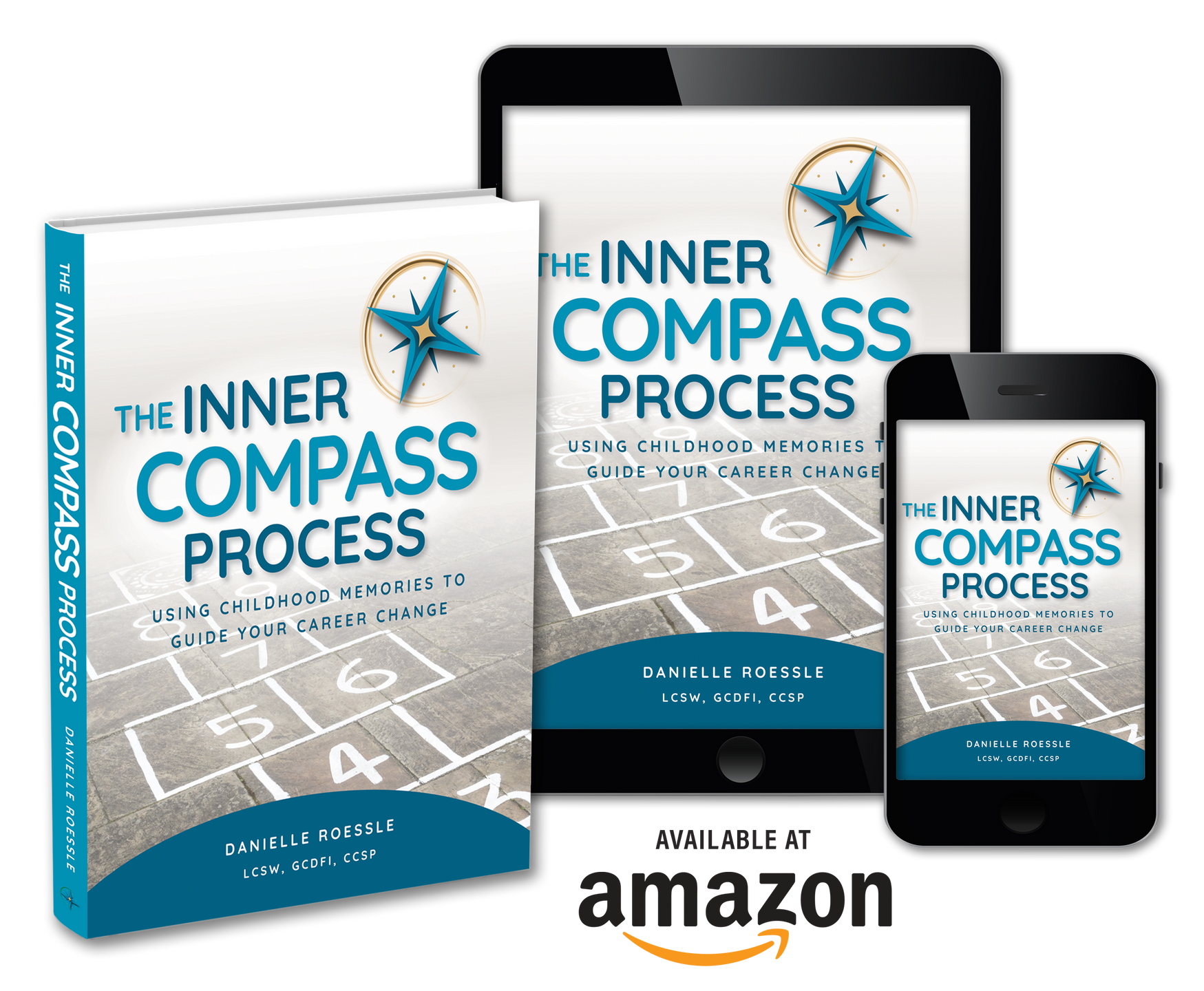